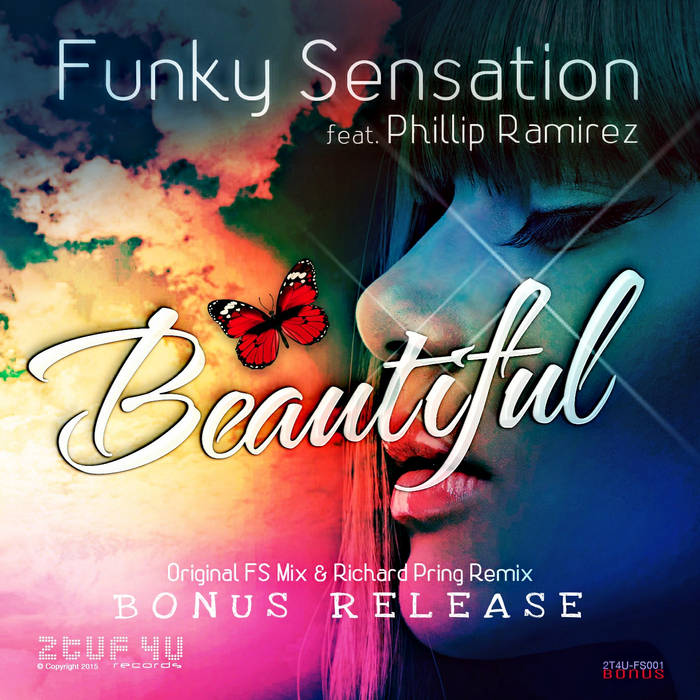 THIS BONUS RELEASE IS DIFFERENT TO OUR DEBUTE RELEASE ON TRAXSOURCE SINCE THIS PACKAGE COMBINES AN EXTRA 4 X MIXES, WITH BONUS MIXES FROM RICHARD PRING & BROKEN SPECIES WITH THERE BUTTERFLY & TRIBAL CUTS.....


INTRODUCTION
Backing track Originally Structured for a Maydie Myles Remix but, retouched with vocals by the amazing PHILLIP RAMIREZ who gave us the vocals on the 95 NORTH's hit track "SEE THE LIGHT" and on this production Phillip with the combination of Funky Sensation delivers a classic stomper with BONUS MIXES on this special release by house producer RICHARD PRING & also a remix by the formidable BROKEN SPECIES.

He has since acquired worldwide recognition as an international recording artist and has performed all over the globe with numerous dance club singles under his belt. His upcoming release “Beautiful” with Funky Sensation on 2TUF-4U Records had its EXCLUSIVE PROMO release on TRAXSOURCE.

His big vocals and charismatic stage presence have lead him into an acting career were he has recently finished a role in a multiple Tony award-winning musical. Phillip is a classically-trained musician and former member of the “American Youth Symphony,” “Richmond Pops” and “Crystal Cathedral.”
He has been a songwriter/composer with BMI music since 1993. Phillip is working with many renowned DJ/Producers in the music industry with several upcoming releases scheduled for 2015. He is thankful to God, his colleagues and the many fans around the globe that have kept him relevant and alive in the music business!

Years ago PHILLIP RAMIREZ teamed up with duo TUFF JAM producing a song for Phillip called "I Want You" but this didn't get to see a release but in 2014 Phillip contacted 2TUF-4U records to work on a song project which had the right elements that would glow so to speak on radio or in the club. With extra versions of this beauty to come we hope that the various supporters give this one a a huge spin.....NJOY

R E M I X E R
RICHARD PRING: - a DJ and house music Producer based in Bristol, UK. He is best known for his work with 'Park Street’.
Since late 2011 he has concentrated on his solo project 'True2life'. The most recent productions have been with former Strictly Rhythm artist Phillip Ramirez, and have had a few releases on the likes of Booker T’s ‘Liquid Deep label with ‘Take Me Higher’, and ’Sweet Memories’ on Swiss imprint Deeptown Music. Tracks and remixes for 2015 include his True2life remixes for 95 North & Phillip Ramirez’ classic track - ‘See The Light’ and more lined up for Circle of Funk’s Slapped Up Soul label.

BROKEN SPECIES: - a new name to the House quarter but not in experience which is a clue for those who don't know. This producer is from the well oiled dance background who has a Discography that as help shape the music in which is made, but hoping to still own his abilities by wishing to teach others about production and experiment with new things.....MORE 2 Come :)
Revelation 21:3,4

Written by Ramirez & Brown
Published by One Tuff Music.